Dance of the Dervishes

Dance of the Dervishes

The Dance of the Dervishes, engraved by W. Forrest in 1860, from ‘World Religion’, published by A. Fullarton & Co. (engraving)

Original antique print, titled: ‘The Dance of Dervishes’. It shows: 11 dervishes dancing, with a large group of spectators in the background. The Whirling Dervishes belong to the Mevlevi order who is a Sufi muslim order founded in Konya in the thirteenth century by Jalal al-Din Rumi. We called them whirling dervishes in reference to their dance called sama ‘(or planted), whose movements are reminiscent of a top.

This print originates from Reverend James Gardner’s ‘The Faiths of the World, a Dictionary of all Religions and Religious Sects, their Doctrines, Rites, Ceremonies, Customs’. This print was published in 1860

Artists and Engravers: Engraved by W. Forrest. Engraved after the original by Picart. Bernard Picart (1673-1733) was a French painter and engraver. He received his art education from his father, Etienne (1632-1721), from Le Brun and Jouvenet at the Royal Academy. His talents developed rapidly: at the age of sixteen he gained honors at the Academy of Paris. He was born in Paris and died in Amsterdam. William Forrest (1805-1889) was an engraver. (Read more about Bernard Picart)

Excellent condition, given age. Some small spots in the margins.General age-related toning and/or occasional light stains from handling. There appears to be a small tear at the bottom, but the print has since been laminated to prevent any further deterioration. Please study scan carefully.

Encyclopaedia of Religious Rites and Ceremonies of All Nations, a fabulous work in the early 18th century 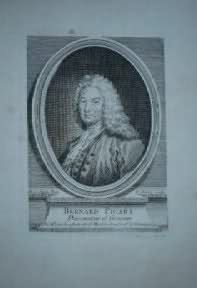 Bernard Picart (11 June 1673 – 8 May 1733), was a French engraver, son of Etienne Picart, also an engraver. He was born in Paris and died in Amsterdam. He moved to Antwerp in 1696, and then spent a year in Amsterdam before returning to France at the end of 1698. After his wife died in 1708, he moved to Amsterdam in 1711 (later being joined by his father), where he became a Protestant convert and married again.[1]

Most of his work was book-illustrations, including the Bible and Ovid. His most famous work is Cérémonies et coutumes religieuses de tous les peuples du monde, appearing from 1723 to 1743. Jonathan I. Israel calls Cérémonies “an immense effort to record the religious rituals and beliefs of the world in all their diversity as objectively and authentically as possible”. Although Picart had never left Europe, he relied on accounts by those who had and had access to a collection of Indian sculpture. The original French edition of Cérémonies comprises ten volumes of text and engravings.

Israel notes also that Picart left Paris with Prosper Marchand, and collaborated on the Cérémonies with Jean-Frédéric Bernard (fr), with a commitment to religious toleration. Picart, Marchand and Charles Levier belonged to a “radical Huguenot coterie”.

His most famous work is Encyclopaedia of Religious Rites and Ceremonies of All Nations (in french: Traité des cérémonies religieuses et coutumes de toutes les nations). It is actually a compilation of edited texts by a number of French authors concerned with religious practices in the Americas, Europe, Africa, Asia, and the East Indies. Within the stated topic of religious ceremonies and customs, a variety of social habits and interactions are described, many accompanied by marvellous, if often imaginative, engravings. Some of the illustrations are rather fanciful, placing Indians in settings that suggest ancient Roman architecture and statuary or traditional European carpentry, furniture, and decorative wooden floors. Bernard’s collection treats such individual topics as combat, sacrifices, religion, funeral customs, romance, and marriage, drawing from disparate sources for their interest value.

There are no reviews yet.

Questions and answers of the customers

There are no questions yet, be the first to ask something for this product.

Good things come to those who sign up for our newsletter
Join our email list to get the latest news, blog posts and promotions straight to your inbox
Give it a try, you can unsubscribe anytime.